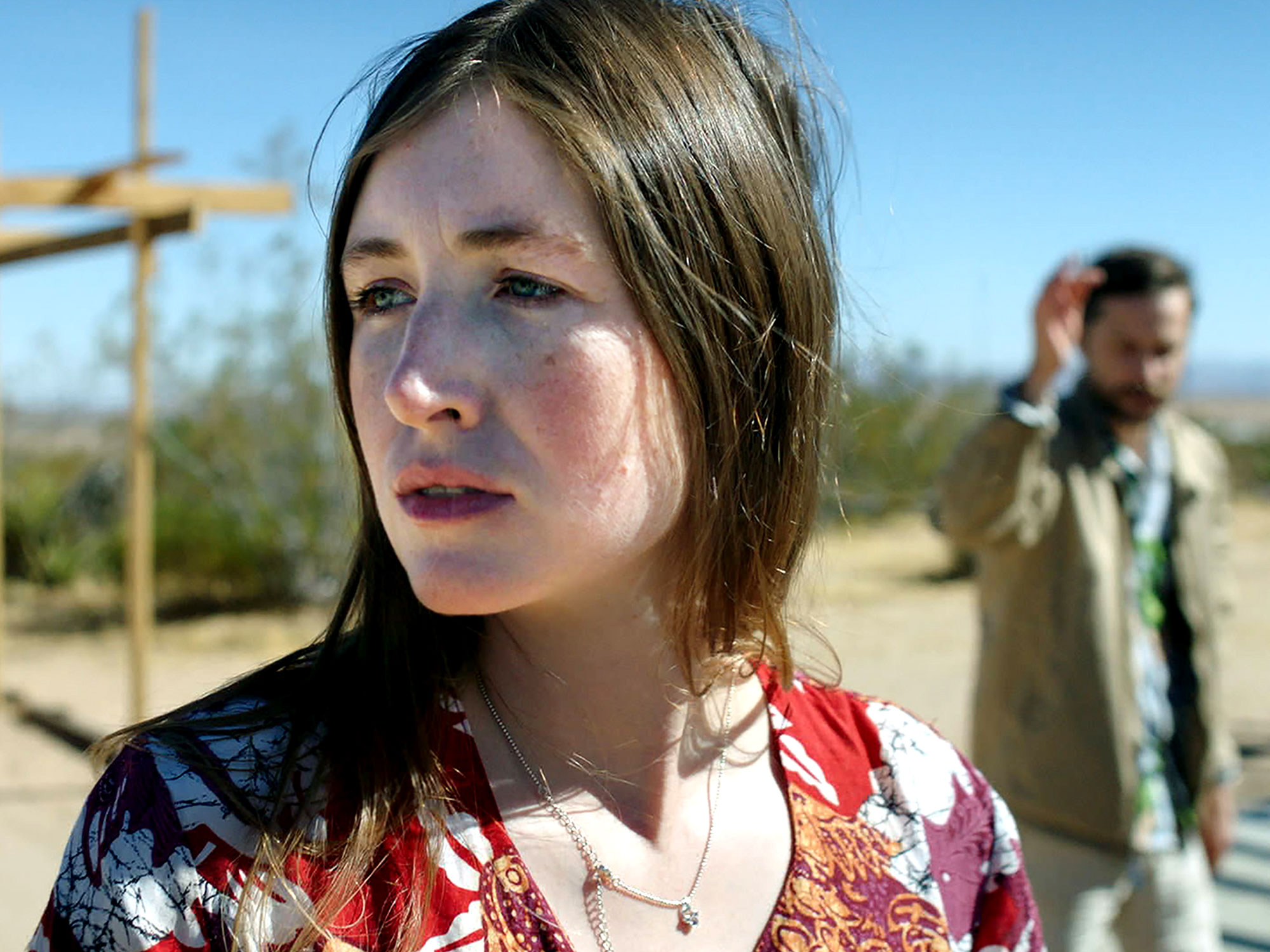 Amy Seimetz’s She Dies Tomorrow is a different kind of disaster film. It features no alien invasion, no devastating natural disaster, no freak cosmic event. Instead, the end of the world is a matter of interiority. One by one, characters come to believe, with absolute certainty, that they are going to die tomorrow; this foresight passes insidiously from one person to the next.

This slow apocalypse originates, at least from what we see in the film, with a pizza delivery driver. That a viral belief in one’s imminent demise should begin with a (presumably young) minimum wage worker in a shitty job is entirely fitting: if any job made you believe that nothing good was coming your way, that your time was running out, it would be the overworked, underpaid service industry.

The pizza delivery scene hints at the origins of the film’s mysterious malaise, suggesting that it is borne out of a despair for the future that is acutely felt by the young. Indeed, although the film presents a stylised, neon-splashed, surreal vision of impending doom, it’s a vision that many younger viewers might nevertheless identify with. She Dies Tomorrow can be read as a defining film of the doomer generation.

The word ‘doomer’ emerged as a meme in 2018, referring to a caricature of a forlorn twentysomething man who has given up on finding meaning in life. Since then, ‘doomerism’ has come to refer more broadly to a pessimism experienced distinctly by young people, who see themselves as coming of age into a world plagued by housing and employment crises, general economic instability, and impending ecological collapse.

If doomerism is a collective dissatisfaction with the world, however, it is one that largely eschews attempts at amelioration – it holds little space for revolutionary fervour, or belief in the possibility of meaningful change. Instead, doomers continue to live life as normal, weighed down by the knowledge that the future holds little hope.

In She Dies Tomorrow, Seimetz intensifies both the gravity and the virality of doomerism, transforming a general anxiety about the future into a belief that one is, quite literally, going to die tomorrow. While doomerism predominantly spreads online, the virus in the film transmits to anyone in the vicinity of an infected person, quickly plunging whole rooms of people into the depths of despair. It’s doomerism on steroids, exaggerated and often comical. So is the film poking fun at doomers, or does it empathise with their concerns?

Despite its frequently absurdist tone, the film’s many unsettling moments preclude it from being wholly satirical. Seimetz’s recurring use of echoing sound and flashing neon lights effectively conveys the protracted, bewildering horror of knowing you are about to die. Similarly, the final scene drains all the colour and comedy from the film in an instant, leaving only a grey sense of existential dread. “I’m ready. I’m okay,” the protagonist Amy repeats to herself as she lies back, waiting for the end; but then, a second later, she changes her mind: “I’m not okay.” As much as she tries to come to terms with her situation, Amy is not ready to die, and this refutation of narrative resolution is frightening.

Read next: Amy Seimetz on how her anxiety and existential dread feed her creative spirit

Although there is no clear explanation for the origins of the contagion, or even proof that its victims really do die the next day, the film does not portray the existential crises of its characters as ridiculous or unfounded. Instead, it shows how powerfully such fears can affect a person. In taking the despair of its characters seriously, She Dies Tomorrow acknowledges young people who might feel a similar anxiety about the future of the world – even if this anxiety is in response to a vague and distant danger.

Yet there is a certain type of doomerism that the film seems less sympathetic towards, such as the caricature from the original meme: the doomer wholly resigned to hopelessness and inaction. This figure is represented by the anonymous pizza delivery guy, who knew for certain he was going to die the next day, yet continued to deliver pizza anyway. Perhaps this is why we never see his face; the film spends its time on other characters, who each earnestly continue to search for meaning, in whatever ways they can, in the time they have left.

At its core, She Dies Tomorrow engages with a number of ideas that lie at the heart of doomerism. How do we cope in the face of real, impending disaster? How do we best spend the time we have left to us, however long that may be? As the film suggests, there are no easy answers. Unlike the characters in the film, however, we at least have a little longer to try and figure them out.

The post She Dies Tomorrow is the defining film of the doomer generation appeared first on Little White Lies.